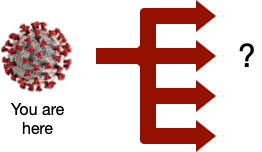 How we got ourselves into this pandemic was quite straightforward: too little, too late, too much incompetence, and a shocking lack of preparation.

How we will get ourselves out of it is not so obvious. Here are the avenues I see:

If so, the pandemic grows exponentially, infects most humans on the planet in short order, the healthcare system is so overloaded it might as well not exist, but the pandemic burns itself out quickly as well.

A medication is found relatively quickly.

I think of it like Robutussin extra-extra strength. This (hypothetical) medication gets symptoms of the infection down to non-lethal levels, say like the common cold. Of course, I have heard nothing to indicate that such a medication could exist, but if one were found then:

Lockdowns, until an effective vaccine is found/developed.

If so, everybody says it’s at least 12 months out, if it can be found. Then it needs to be mass-produced and delivered. So:

Lockdowns, but no effective vaccine is found/developed.

That’s of course possible. In which case, we will either stay on indefinite lockdown or, because we do need to eat and need a functioning economy, the lockdowns will stop and the situation reverts to “We do nothing” after some time.

And finally, perhaps there is a way to throw information technology at the problem:

The idea is to track the likely infection status, and infectiousness, of everybody on the planet, plus their movements with respect to other people and things that help transmission, and continuously update their likely status based on the infectiousness of the people and things they encountered. If this were done with enough information, and enough spatial and temporal resolution, we could with high confidence quarantine only those people who are likely infectious, and let the rest live their lives – in particular their work and consumption behavior – relatively unchanged.

To make this kind of thing work, there would literally be thousands of problems to solve, and there is no guarantee whatsoever those problems could be solved, but it is an intriguing thought.

Summary: I wish we had the option of “and then a miracle occurs”.